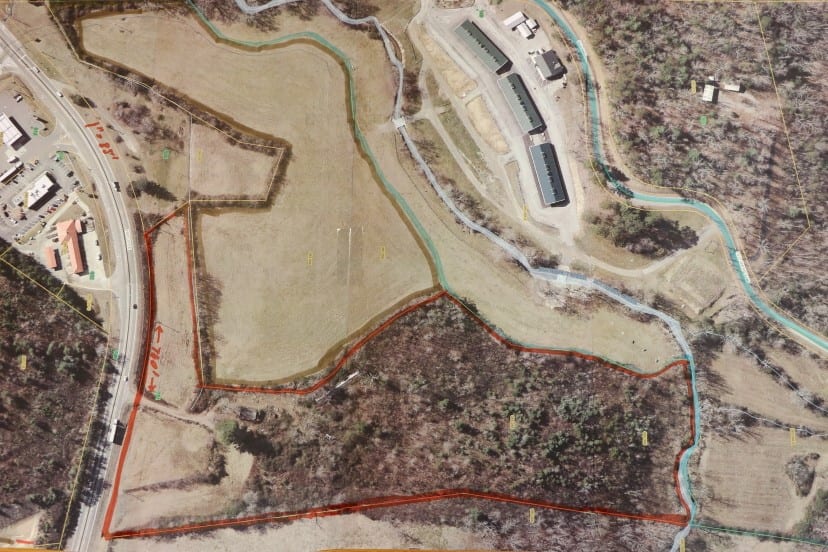 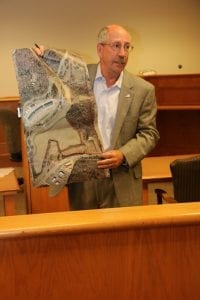 Blairsville, GA – Union County Sole Commissioner Lamar Paris announced in his May Commissioner’s Meeting on May 18, 2017 that an Option Agreement between Union County and the Estate of Leon Davenport, Sydney Vandiver, Laurie Shelnut and Kenneth C. Chambers for a 90-day option had been executed to purchase the property located in Land Lot 269, 9th District, 1st Section of Union County. The cost of the option was $500. The parcel of land is 13.080 acres and runs generally north to south bordering the east side of Blairsville Farmer’s Market property which Union County already owns. The price of the land is $678,500; which is $51,873 per acre. Paris said he anticipates closing on the property in the next 45 days. He said the acquisition of this property is a boon for the citizens on Union County as it will enable the County to further expand its recreational capabilities. He expressed a heartfelt thank you to the Davenport Family for working with Union County in this matter; he said the original asking price was about $1.2M. The Davenport Family is excited for Union County to be able to utilize this property, he said.

Paris said work on the reconstruction of the Hunter-England House, the oldest house in the County and on the Farmer’s Market property, was going very well. He estimated it to be about 75 per cent complete at the time of this meeting, if you don’t count the chimney.

Work on the old Blairsville Graveyard, he said, is coming along well. He said that about two years ago it was established that there were 104 unmarked graves plus the 60-70 marked graves. He said that five of those graves are those of Confederate Veterans and that the Sons of Confederate Veterans had been instrumental in helping with the revamping of the old cemetery. “We owe it to those that came before us to at least take care of their graves”, he said.

Butternut Golf Course is getting a new irrigation system, said Paris. He said the cost will be in the $600-750K range. He said the old system, after over thirty years, finally gave out. It’s a big expense, he said, but a necessary one.

Paris said that the developers of Hidden Harbor out on Hwy 129 donated two acres of land (near the entrance) to Union County and the County bought another acre. He said a fire and rescue station is planned for that property and possibly a recycling center. He said preliminary grading might get started this year for that project.

Paris said that he, County Manager Larry Garrett and Magistrate Judge Cary Cox went to Washington D.C. earlier in the week and witnessed the Military Service and burial for Leon Davenport. He said the event was “indescribable”; that he didn’t think a President could have been treated any better. He said the three of them were as touched by the event as any three people could be. He said they marched with a group of about 35 people behind the caisson for about a third of a mile until they reached the burial site. It was something he said he’d never forget. 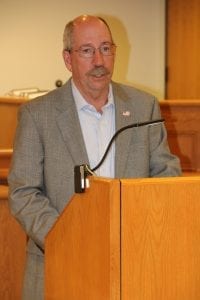 Union County Resident Pat Thibodeaux, during public comment, asked Paris when the Union County Jail would get some attention. She said that she had toured the jail and that there were inmates sleeping in makeshift beds on the floor and others that had to be transported to surrounding county jails. Paris responded that the County Jail had been built by the previous Commissioner. He said that it had been built too small in the first place and that he had been compelled to sink $600-800K just into grading around it to keep it from sliding off the hill shortly after he took office. He said that he had replaced all the heating and AC units about four years ago. He said he had given the Sheriff’s Office the go-ahead to fix anything that breaks down. Normally, he said, overcrowding only happens for short periods of time. He said it is less expensive to house inmates at remote facilities than it would be to build a new facility. Paris said: “If they’re not having a good time over there, I don’t care. I want it to be rough on them”. He said where he draws the line is if the Deputies are not safe. That, he said, can’t happen. But, he said, he would not allow inmates, who caused problems for Union County citizens, to detract from County projects that benefit Union County citizens.

A video of the entire Meeting can be viewed here.