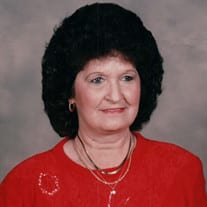 Cochran Funeral Home and Crematory announces funeral services for Mrs. Margie Davenport Alexander, age 76, native and lifelong resident of Blairsville, who passed away on Wednesday, March 21, 2018 at her home.

Mrs. Alexander was a member of Youngstown Baptist Church. She was preceded in death by her husband, Milton V. Alexander; her parents, Claud and Sue Davenport; a sister, Mildred Cook; and a brother, Glen Davenport.

Margie leaves behind a legacy of love for her surviving family members: son and daughter-in-law, Joe and Cheryl Dyer, of Blairsville; grandson and his wife, Cody and Chantelle Dyer of New Zealand; grandson Kyle White of Birmingham AL, and granddaughter Heather White of Blairsville; sister and brother-in-law, Melba and Tommy Jackson; sister and brother-in-law, Mazie and Bruce Gray, sister and brother-in-law, Martha and Johnny Brackett; brother, Gary Davenport and Jodi Thomas all of Blairsville; sister-in-law, Debbie Davenport, of Jefferson, GA; step-son and wife, Shawn and Deidre Alexander, of Cleveland, GA; step-daughter and husband, Enid and Ken Smith, of Lula, GA; step-son and wife, Jon and Stormy Alexander, of Baxley, GA; 16 step-grandchildren and 3 great grandchildren, several nieces, nephews, and many friends also survive.

Funeral services have been scheduled for Saturday, March 24, 2018, at 2:00 p.m., to be held in the Chapel of Cochran Funeral Home of Blairsville, with Rev. Jerry Karnes, Rev. Steve Rhoten, and Rev. Jonathon Hood officiating. Special music will be presented by Ken and Enid Smith Family and Martha Davenport. The following gentlemen have been selected to serve as pallbearers: Kyle White, Dan Rhoten, Robert Spiva, Shawn Alexander, Jon Alexander, and Ken Smith. Burial will be in Ivy Log Cemetery. Visitation at the funeral home will be held on Saturday, the same day of the service, starting at 12 noon.
Margie Davenport Alexander was born on November the 28th, 1941 to Reverend Claud Davenport and Sue Burrell Davenport. Margie was the third girl born to the Davenports and was named for her father Margie Claudette. This name was very fitting as she had dark curly hair like her father and always his favorite of seven children.
As the years quickly passed, she was a very precocious child and soon discovered the words women now live by CHARGE IT. In the mid forties children roamed the woods and roads with no fear. Margie with her younger brother, Glen in tow struck out for the country store. Margie promptly loaded up with bubble gum, charged it to her father and they headed for home. Sending Glen ahead to give her sister and mother the one piece of gum they had saved for them, Margie hid in the garden knowing she was in trouble.
Growing up in rural Union County there were two things you did. You worked and attended church. Margie worked at home, helping with the younger children, in the field with the whole family or doing chores for a neighbor. Margie was taught to cook and was a great cook. Chocolate fudge was her specialty and requested often by family and friends. The seven Davenport children were always close especially the daughters. Margie always had a close relationship with all her siblings.
.
Margie worked several jobs one of her favorites was working at Walasi Inn, on Blood Mountain her last year of school. She lived with the family that ran the Inn and helped care for their children. She enjoyed the freedom and the new experience of being away from home. Margie worked at Georgia Boot for thirty – two years. She worked in the office for many years. She was then promoted to a managerial position in the warehouse. This job was considered to be a man’s position but Margie handled it with no problem wearing HIGH HEELS and not boots. Margie was always organized, punctual, clean, neat and dressed to the nines. Her nails were manicured, her hair done to a tee and she was always correct. She was later employed in the insurance industry for thirteen years before retiring.

Margie married Raymond Dyer at the age of seventeen. They had one child Joseph Ronald Dyer (Joe). Margie was the side line mother at ballgames always attending. Margie had one grandchild, Cody Christopher Dyer. Margie excelled as a grandmother. They played, traveled and did all the things she could not do with Joe as a working mother. Cody was the light of her life.

She later married Milton Alexander, an electrical engineer from Commerce. After Milton’s death Margie’s health began to fail. She could not care for her home alone. She sold her home and moved to Brannon Lodge. There she ruled the world from her dining table with her computer, pen and telephone.

If you wish, in lieu of flowers, the family has suggested memorial contributions be made to Ivy Log Cemetery Fund, 36 Jamie Gray Lane, Blairsville, GA 30512.

Cochran Funeral Home and Crematory of Blairsville is honored to be serving the Alexander family. Please share your condolences and fond memories with the family on our website,www.cochranfuneralhomes.com.