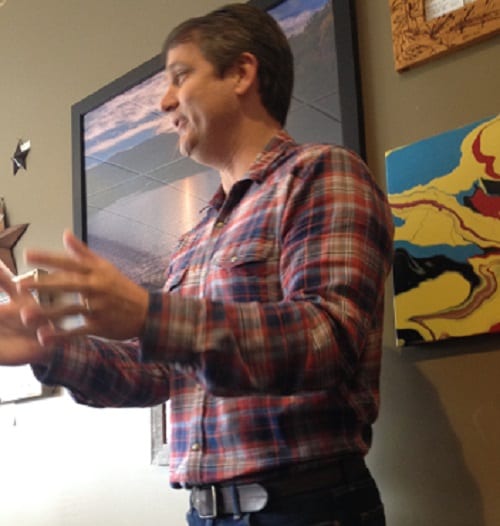 BLAIRSVILLE, Ga. – The Towns/Union County Presidents Team heard from two candidates in the upcoming May 22 primary at their Monday, April 9, meeting in Blairsville: Georgia gubernatorial candidate and current state Senator Michael Williams and local candidate for the Union County Board of Education District 4 seat William McQuillan.

Williams presented an overview of his path to political office saying, “I just got fed up and frustrated with government.”

Williams, a certified public accountant, owned a SportClips franchise in Georgia that encompassed 18 locations with 160 employees. According to Williams, the roll out of the Affordable Care Act, aka Obamacare, led him to sell his chains of stores in 2013 and seek a state senate seat the following year. “I didn’t see how, with the weight of Obamacare, how my small business could afford that,” Williams explained. 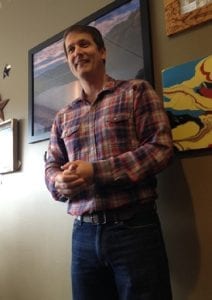 During Williams’ campaign stop at the Presidents Team meeting, the gubernatorial candidate made several comparisons of himself to President Trump to the non-profit organization designed to educate people of the current policies of the president’s administration.

“I was the first elected official in Georgia, back in September of 2015, to come out and publicly endorse Donald Trump for president,” Williams proudly told the crowd, though admitting at first he was skeptical. “I started listening to him. I started kind of researching him a little bit, and I realized, this guy, he’s speaking our language.”

Williams stated he admires Trump for taking a stand against corporate-controlled lobbyists in Washington D.C. and added that Georgia needs someone like Trump in the Governor’s Mansion in Atlanta.

Like Trump, Williams said his campaign is self-funded and that if elected, he would represent the people of the state, not lobbyists.

Also, in wake of the school shooting at Marjory Stoneman Douglas High School in Parkland, Florida, that took the lives of 17 people Feb. 14, Williams stated he agrees with Trump in arming well-trained teachers and faculty within schools. Williams said he feels this would give faculty the ability “to protect our students in being armed themselves.”

As for the issues he hopes to address if elected governor, Williams stated he wants to cut spending while also eliminating the state income tax. To do this, he said he would focus on accountability through internal controls in an effort to curb wasteful spending. According to Williams, Georgia’s budget has increased 71 percent in the last eight years.

Williams also stated as governor he would support legislation that would limit the control of state school accreditation boards over local school boards, allowing local school boards more freedom to represent the people of its district.

As for the Union County Board of Education, candidate for the District 4 BOE seat William McQuillan was also on hand Monday to speak with the Presidents Team.

Spending time in a leadership role with the Union County Republican Party, McQuillan said he began to hear a consistent complaint at the Republican Party meetings: “Our school board is just not listening to us. They’re not talking to us. We don’t know what’s going on there. You know, they’re the biggest piece of the budget, they’re the biggest employer in the county.”

McQuillan stated he would like to see several improvements in the BOE if elected. One improvement McQuillan put forth is strict adherence the state’s open meetings law, which states only personnel, litigation and real estate can be discussed in closed, executive session. The candidate claimed most of the BOE’s business is conducted in executive session.

“It all seems to be behind the curtain. It’s all done in executive session,” McQuillan explained. “If you’ve been to one of our Board of Education meetings, you (general public) are not allowed to speak. They always say, ‘We’re glad that you’re here, but don’t try to talk to us. And we don’t want to get a comment from you. We don’t want to let you ask a question.’ Everything that seems to happen, happens when they say, ‘Time for executive session.'”

“We need to have community outreach from the board to the stakeholders, that’s us, that’s the citizens, that’s the taxpayers,” McQuillan continued, “and we need to have a vehicle for communicating back to the board … Additionally, I’d like to see that the Board of Ed as an equal partner with the superintendent (of schools).”

McQuillan also stated he was disappointed in the Board of Education’s approach during its Feb. 20 meeting that followed the Parkland shooting where the board reviewed and discussed already established policies for school safety. “The school board should be making policy,” McQuillan said. “The job of the Board of Education is to be the leader in setting school policy on important matters.”

In the Republican primary, McQuillan will be opposed by John T. Strickland and incumbent Keith Potts for the District 4 seat on the BOE. No candidates are running on the Democratic ballot.

As for the Georgia gubernatorial race, Williams will be opposed by six other Republicans in the primary, including Lieutenant Governor Casey Cagle, restaurateur Eddie Hayes, state Senator Hunter Hill, Georgia Secretary of State Brian Kemp, tech businessman Clay Tippins, and author Marc Urbach. In the Democratic primary, state Representatives Stacey Abrams and Stacey Evans are seeking the nomination for the November general election.

The primary begins April 30 with early voting and election day will be Tuesday, May 22.