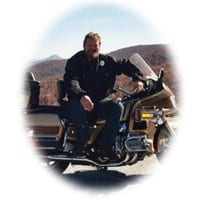 Our dear brother, son, and uncle, Kenneth Christopher Guettler, AKA “Boots”, passed away peacefully at his home in Blairsville Ga. on July 22, 2018.

Kenny was a long time resident of Blairsville Ga., having been both self employed as a mechanic, and contract working as a welder.

Born in Ft Lauderdale, Fl. on November 30, 1959, Kenny grew up in Ft. Pierce, Fl., the second child of Norbert and Patricia Guettler, moving with his family to Blairsville Ga. his junior year.

After graduating Union County High in 1977, Kenny enlisted in the United States Air Force, serving both in Minot, ND., and Seoul, Korea, where he also volunteered at the local orphanage. He certified in the Air Force in heavy equipment mechanics and operations.  Kenny loved reading, riding his motorcycle, scuba-diving, and fishing. He was a member of the Chatuge gun club, and a past member of AMVETS. He truly loved his country and expressed his patriotism often.  He enjoyed cooking, especially on the grill, and no one told a story better than Kenny, every detail, recalled and embellished, with precision. He will be remembered as the big guy with a rough voice and “teddy bear” heart, a defender of women, a timely joke teller, with a hearty loud laugh, and the occasional affectionate grin for his nurses.

He is preceded in death by his father Norbert J. Guettler, as well as both grandparents on maternal and paternal sides. Surviving family includes his mother, Patricia Elizabeth Rountree Guettler of Blairsville Ga., and siblings Cecilia (Guettler) and George Holland (Blairsville, Ga), Katrina Guettler (Decatur, Ga) Julie and Patrick Guettler (Ft Pierce, Fl), nephew Jason Holland, nieces: Kristi (and husband Derrick) Toogood, Sierra Guettler, and Elizabeth Guettler, as well as great niece and nephew Maddie and Derrick Toogood, and many other relatives as well as friends here and in Florida.

A procession to the site will leave the church parking lot at 2:00 p.m. to Holly Hills Cemetery, (130 Ford Mountain Rd., Blairsville, Ga.) for military honor guard and graveside blessing.

Those who love and miss him are welcome to attend all ceremonies.

In leu of flowers, please donate to St. Vincent DePaul Society or The Kidney Foundation.

Mountain View Funeral Home of Blairsville is in charge of the arrangements. You  may  sign the family guest book and send condolences on line atwww.mountainviewfuneralhome.com