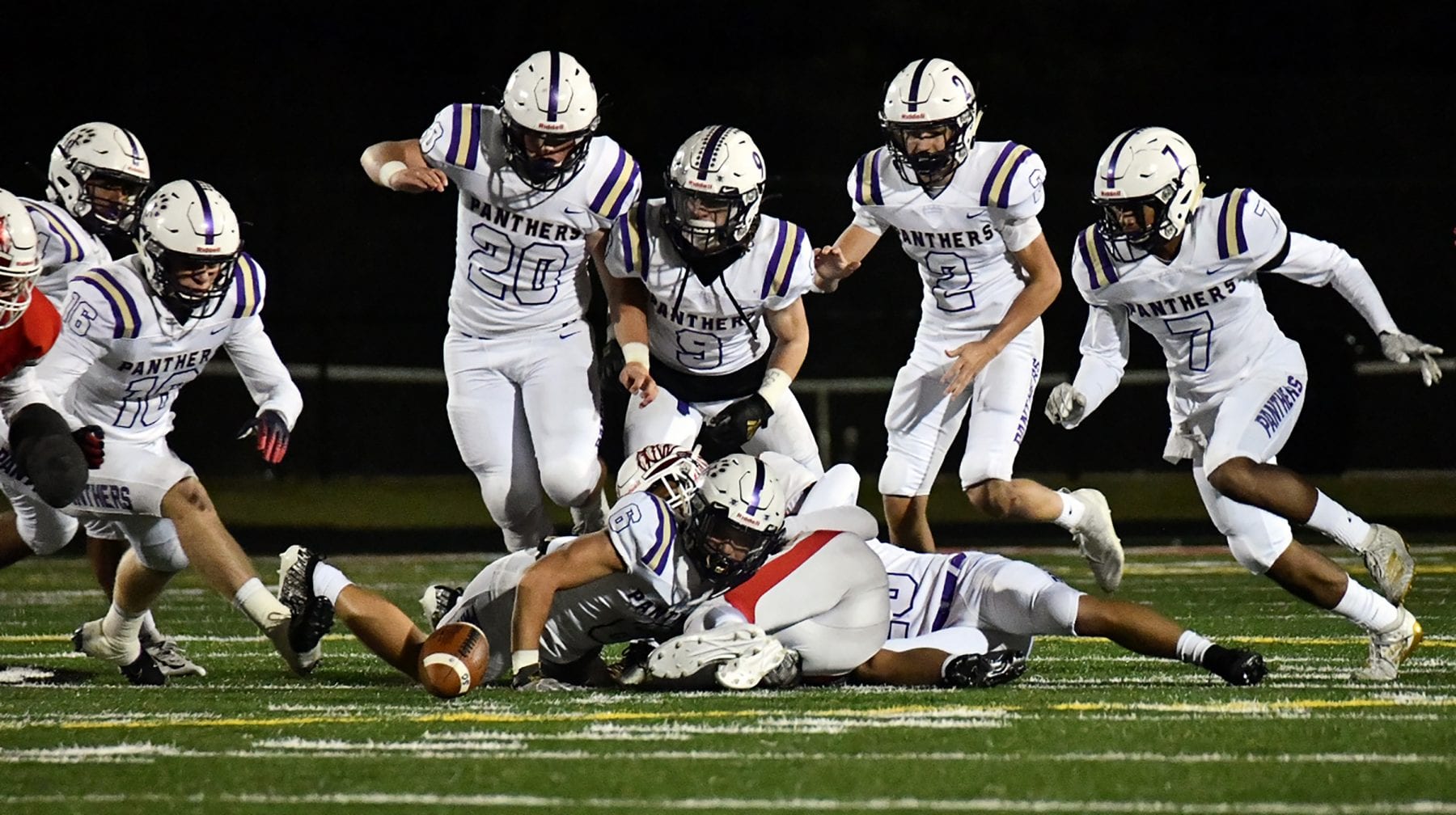 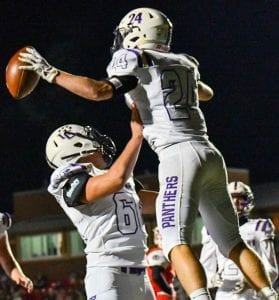 Junior Jonah Daniel (No. 24) is hoisted into the air by fellow junior Aaron Helton in celebration after a touchdown run.

SOCIAL CIRCLE, GA – If the Union County Panthers had played flat Friday night at Social Circle, it would have been understandable.

If the Panthers, currently ranked eighth in the state, had come out with little-to-no enthusiasm against Region 8-AA’s last-place team, in a game that had no effect on next week’s region championship showdown with Rabun County, no one would have been surprised.

But that’s not what happened.

Union County (9-0, 6-0) came to Social Circle like it was a business trip and the team had a job to accomplish before being allowed to take the three-hour bus ride home.

The Panthers handled that business and finished the job in a 41-6 demolition of the home team Redskins.

Other than a few plays ran before halftime, Union County had six drives in the first half. 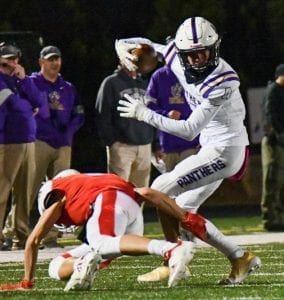 Senior Josh Orr puts a defender on the turf with a move after making a catch Friday night. Orr finished with three catches.

They scored touchdowns on all six and the outcome of the game was never in doubt.

Efficiency proved to be the keyword for the Panthers, as senior quarterback Pierson Allison threw just 14 passes for 10 catches and two touchdowns.

Junior running back Jonah Daniel carried the ball just 10 times, but scored three touchdowns and went for more than 100 yards for the seventh time this season. One of those runs, a 48-yarder in the second quarter, was the last score of the game for the Panthers. 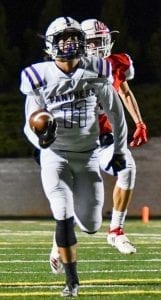 Senior Cayden Rich sprints during his 72-yard touchdown catch in the first quarter.

That score came with a few minutes remaining in the first half.

Senior Sloan Sutton added a score running the ball, an 8-yard burst that put the Panthers up 34-0 early in the second quarter.

Allison hit four different receivers on the night, with senior Cayden Rich and junior Mason McCombs each catching a touchdown.

The festivities started early for Union County, who kicked off to Social Circle to open the game.

On the Redskins first play from scrimmage, the quarterback muffed the snap and the ball hit the dirt.

Sutton, who starts as the team’s middle linebacker, fell on it, giving the Panthers their first offensive possession of the night.

A few plays later Daniel hit a big hole, rumbling 19 yards untouched into the end zone to give the Panthers the lead for good with 11:04 left in the first frame.

The defense then forced the first of the four punts from Social Circle in the first half.

Allison got into the mix on the ensuing drive, hitting Rich on a straight post route for a 72-yard touchdown to put Union County up 14-0.

The theme continued for the remainder of the first half, as the Panthers were too big, too strong, and simply too talented for the Redskins to keep up with.

Daniel scored his second rushing touchdown of the game with 4:54 left in the first quarter. The point-after attempt went wide right, and Union County led 20-0.

Four minutes later, McCombs made a beautiful, toe-tapping catch in the corner of the end zone to give the Panthers the 27-0 lead.

Junior Noah Underwood continued to play well leading the defense. He recovered a fumble on a kickoff and then recovered another fumble in the early minutes of the third quarter.

The starters for Union County played just one series in the second half, before head coach Brian Allison sent the junior varsity on the field for some much-needed game experience.

With the score at 41-6 to start the half, the referees went with a running clock and the score remained the same as the junior varsity squads went at it.

Union County faces No. 4 Rabun County, who is also undefeated, at 7:30 p.m., Friday, Nov. 8, in Blairsville. The winner will be the No. 1 seed from Region 8-AA headed into the state playoffs.