Led by a dominating defense, the Union Co. girls basketball team controlled every phase of the game Thursday night, Feb. 13, in a 69-40 win against Therrell in the first round of the Class AA state playoffs in Blairsville.

Freshman Ellie Cook goes up for a shot Thursday, Feb. 13. Cook finished with seven points in the win.

Union Co. (22-6) forced turnovers on the first four Therrell (10-11) possessions while putting together an 8-0 run on offense. They led 16-7 at the end of the first quarter and never looked back.

Sophomore Ava Hunter, who is averaging 16.6 points per game this season, scored 27 in the win, which tied for her second-highest point total in 2019-20.

“They were very focused going in,” Beach said. “Emotions and energy levels are always high, but they handled it well and stepped to the floor ready to play Lady Panther basketball.”

Even though Union Co. held visiting Therrell to just seven points in the first quarter, and built a 17-point lead, 36-19, heading into halftime, Beach said the defense still has some work to do.

“There are some things we need to improve a bit (on defense),” Beach said. “The press worked for us, but we need to execute more tightly with some of the things we saw out there. We definitely did what we had to do. Therrell is a great ball-handling team, with several kids who can take it all the way, so for us to put a stop to that shows how strong and capable our defense can be.”

Along with Hunter’s 27 points, senior Kait McCarter scored 12, while dominating on the offensive and defensive glass.

Senior Andelin Hill scored nine points, including knocking down two 3-pointers in the second half to keep the game out of reach for Union Co. 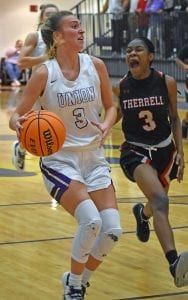 Senior Brooke Dockrey, left, drives into the lane Thursday, Feb. 13, in the first round of the Class AA state playoffs.

Those four players – Hunter, McCarter, Hill, and Dockrey – have been the core of success for the Lady Panthers this season, and Beach said she wasn’t surprised they showed up big when it mattered the most.

Freshman Ellie Cook, who scored the first two points of the game with a layup off the opening tip, finished the night with seven points.

Sophomore Rebekah Chambers scored six points, all in the second half, to round out the scoring for Union Co.

With the win, the Lady Panthers advanced to the second round of the Class AA state playoffs. As the No. 1 seed from Region 8-AA, they will host the winner of Bryan Co. and Butler.