BLAIRSVILLE, Ga. – During the Union County Board of Education (BOE) work session Tuesday, Feb. 20, Dr. Fred Rayfield, superintendent for Union County Schools, delivered an update on school security and safety procedures in the wake of the recent school shooting in Florida.

Rayfield stated there are three non-negotiable duties for which all employees of Union County Schools are responsible: teach students, protect students and act ethically and professionally.

The superintendent clarified that all security and safety plans and protocols for Union County Schools have been approved by the state and Georgia Emergency Management Agency (GEMA), and Union County has been used as a model for other north Georgia school systems to follow. 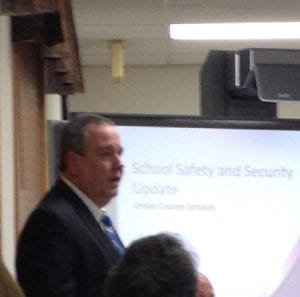 Dr. Fred Rayfield, superintendent of Union County Schools, updates the Board of Education on school safety and security policies and measures Tuesday, Feb. 20.

“Every aspect is reviewed annually,” Rayfield said of the school system’s security and safety policies. “Safety enhancements and additions are an ongoing priority.”

Additionally, other system-wide safety features include a required picture ID for all school system employees, security cameras inside and outside of facilities, security cameras on buses, thorough visitor sign-in processes, secure “buzz-through” main entry points at facilities, 24/7 monitoring of electronic threats and messages on social media and other online outlets, and on-site panic buttons.

Rayfield explained the school system has spent over $715,000 over the last five years on these and other safety enhancements for schools, which averages to $271 a student spent for safety and security measures.

“I can assure you,” Rayfield told the audience at the meeting, “that there are some things in place here that make me feel very good about where we’re at with security and that we’re making progress toward getting better … I believe that we do everything that we can to protect kids no matter what the situation, and I applaud the (BOE) for appropriating the resources over the last three to five years .”

Following Rayfield’s presentation, BOE member Janna Akins stated, “I think it’s hard to fathom that we’ve got kindergartners that we should be concerned about in these kind of situations, but that’s just the times that we live in now. This information was very helpful, and I appreciate the board and the school system’s approach of not just having a reactionary plan but an ongoing plan to make (safety) a priority.”

Also during the work session, Courtney Waller, school nutrition program director, presented a slight revision to the school system’s wellness policy. Waller explained the policy, according to federal mandates, must be reassessed every three years

Later, in the regular meeting, as the board was about to approve the revision, Rayfield explained this proposed revision must remain tabled for 30 days before final approval can be made to change the policy.

In the regular meeting, Superintendent Rayfield awarded two presentations with the first being an art student recognition awarded to second-grader Emma Taylor. Taylor’s design was selected for use on the Union County School System Christmas card in 2017. “Thank you for a beautiful piece of artwork,” Rayfield told Taylor.

“They do a tremendous amount of work throughout the school system to provide lots of services for our students and employees,” Rayfield said of the hospital’s partnership with Union County Schools, “and we’re just absolutely excited to recognize Union General Hospital as our community partner for this month.”