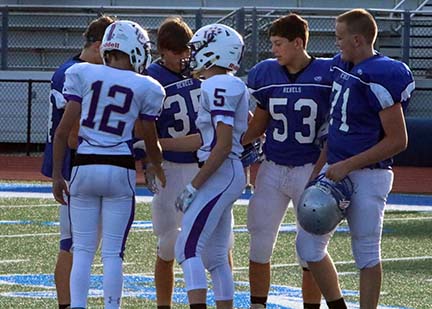 The Junior Varsity squads for the Union Panthers and the Fannin Rebels battled it out on the football field last Thursday at Fannin High School Stadium.  As the sub-varsity schedule starts winding down these two teams came ready to play and do their best to earn a hard fought victory. 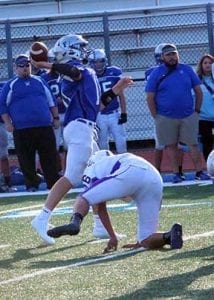 The captains come to the center of the field for the coin toss in which the Panthers won and chose to receive the football to start the second half.  The Rebels took the ball to start the game.  Both of the defenses started strong and kept the game scoreless late in the first quarter.  With 3 minutes and 58

seconds in quarter the Rebels pushed a score across the goal line making the score 7-0.  The Rebels forced a turnover and on the ensuing possession added 7 more with 3:13 on the clock.  The start of the 2nd quarter saw the momentum change to the Panther side of the ball. The Union offense started firing on all cylinders to put up 14 points of their own.  Back deep for the panthers was #7 who took a Rebel kick off 80 yards for a panthers score.  As a receiver he also had an 88 yard catch and run for another 7 to bring the score at 14 a piece to end the first half of play.

With the choice by the Panthers to receive the ball in the second half the Rebels placed the ball on the tee.  Catching everyone off guard, Fannin executed a perfect on side kick and recovered to take possession at the Panthers 48 yard line.  The Panthers defense brought the Rebel drive to a quick halt and took over on downs switching the energy back to their side once again.  The Rebels coaching staff took an opportunity to get the 8th grade squad in the game for some very valuable experience.  These younger players played hard and competed to the level of the game.  The Panthers were able to put up 2 touchdowns in the third quarter bringing the score to 28-14 over the Rebels.  The game would end with that score in favor of the Panthers Junior Varsity.  The Panthers had over 350 total yards to the Rebels 273 yards.  Each team had several penalties called against them but played very well in an exciting game.  Can’t wait to see these young athletes play at the varsity level for Union and Fannin in the coming years. 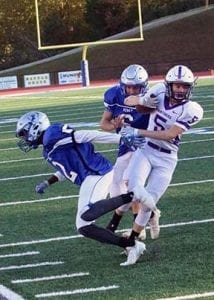 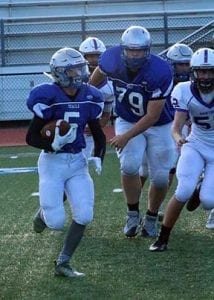