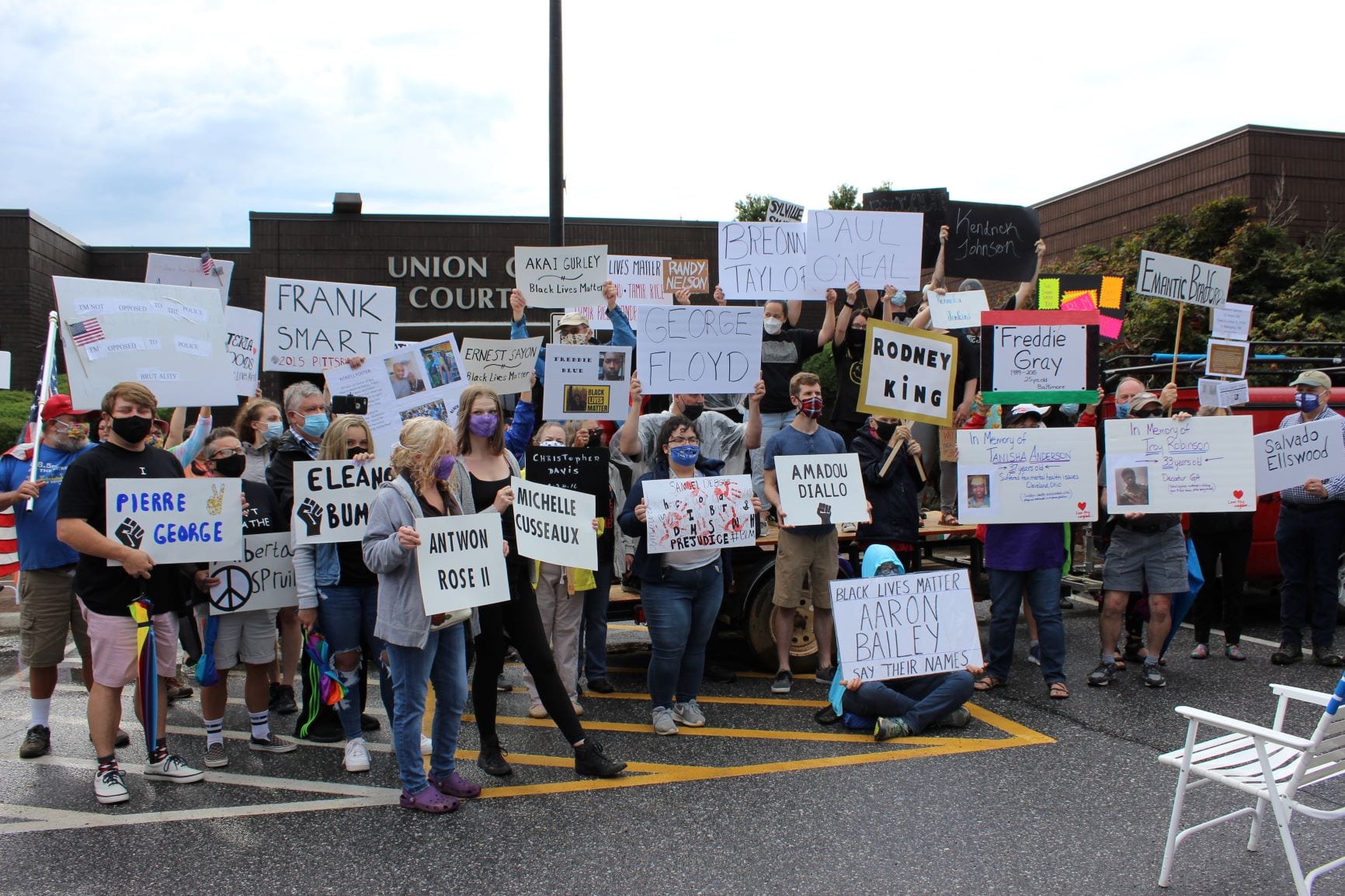 Blairsville, Ga – Two groups exercised their right to peaceably assemble in front of the Union County Courthouse on Sunday, June 14.

Individuals with the Black Lives Matter (BLM) Movement announced their intentions to gather last week between the hours of 6 to 8 p.m on June 14. The demonstrators felt compelled to voice their opinion about the disproportionate violence that occurs against black Americans at the hands of law enforcement.

The Blairsville Police Department (BPD) released a statement on Friday, June 12, and disclosed that the rally organizers were asked to ensure a peaceful assembly. The BPD didn’t expect any acts of violence but were ready to keep the community, residents, and businesses safe if needed.

Around 100+ protesters and 50 counter-protesters came out on a rainy Sunday to support BLM or “all lives matter.” Most of the crowd came from Blairsville or Murphy, N.C. Several of the Murphy Peaceful BLM Protest organizers were present along with Ninth District Congressional Candidate Devin Pandy (D) and Eighth District State Representative Candidate Dave Cooper (D).

The rally began with a prayer given by St. Clare’s Episcopal Reverend Liz Schellingerhoudt. She implored the Lord to, “look with compassion on the whole human family, break down the walls that separate us and unite us in bonds in love. Work through our struggle and confusion to accomplish your purposes on Earth that all nations and races may serve you in unity.”

Many of the signs featured names of black Americans killed while in police custody.

Several came forward to speak about the importance of the BLM movement and one of the organizers read a prepared speech from Tray Taylor, who couldn’t attend.

“I live in fear that a traffic stop may take my life. I fear that one call from a person who feels I don’t belong in a certain area may end with unwanted persecution and harassment. I am not a tired black man. I am a man who is tired because it seems like for every step forward, we take 100 backward,” expressed Taylor. He also retold his first encounter with the police, the NYPD, who told him to line up on the streets because a white woman said a black man raped her.

However, since moving to Murphy, Taylor changed his view of law enforcement and now sees how they help, not hurt – use compassion instead of fear. 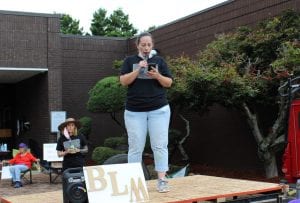 One of the Murphy Peaceful BLM Protest TeLor Allen spoke about her experience as a black American, beginning at age 11 when Trayvon Martin was shot and continuing until the present day.

“These peace protests, igniting across our country, are not solely about George Floyd,” declared Allen. “These men and women deserved the opportunity to live, but it was stripped away with little to no justice.”

Allen also spoke of her outrage against the people trying to derail the protests in local communities. “I will scream black lives matter at the top of my lungs if that’s what it takes,” she stated. “Black lives will forever and always matter, and if that’s an insult to you, that’s on you not on me.”

Maria-Elena Mariel Olcoz-Verdun, a Blairsville Peaceful BLM Protest organizer and member of the Pulse Community, also spoke by proxy, “Cops are expected to do everything from rowdy neighbors to mass shootings. It’s overwhelming, and if you add racism to that, you get horrific results. The Orlando Police Department posted online that 10,000 protesters showed up recently and there were zero arrests. This is a well-trained department that has a well-unified connection with its citizens. This is the example we should follow. The citizens are just as protective of the police as they are of them.” 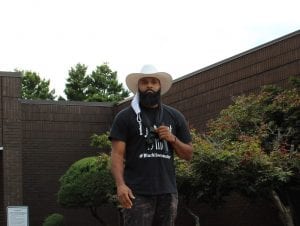 Olcoz-Verdun went on to state that officers wouldn’t lose pay if funds were moved to different departments or programs. Law enforcement would be relieved of some of their additional responsibilities, according to her statement.

“Today is about illuminating the suppressed and giving this community a fruitful foundation on which we can all thrive. Racism needs to stop now. Humanize the victims. They are people,” proclaimed Olcoz-Verdun.

Shouts from counter-protesters could be heard while BLM members observed 8 minutes and 46 seconds of silence – the length of time Minneapolis Police Officer Derek Chauvin stood on George Floyd’s neck. This act ultimately resulted in Floyd’s death according to the family autopsy.

The Blairsville Peaceful BLM Protest Group asked that everyone who participated to refrain from creating anti-police signs, bringing firearms or pets, and to not engage with counter-protesters.

A heavy police presence separated both groups and provided safety for everyone who came out to express their First Amendment Rights.

Everyone followed these guidelines for the most part, but once the speakers ended, several protesters faced their signs toward the separate group. Each side expressed their viewpoints, and eventually, some dialogue took place between Candidate Pandy and one counter-protester. Pandy seemed to want everyone to understand the importance of coming together – across political or spiritual divides. 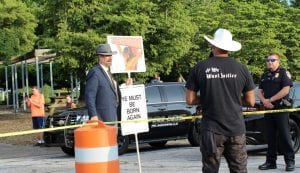 Pandy conversing with a counter-protester.

BLM protesters also chanted “No Justice, No Peace” and “Black Lives Matter.” Some laid down on the wet pavement and put their hands behind their back as well.

In the protest procedures, it also stated, “We said BLM/ We never said only BLM/ We know that all lives matter/ We just need help showing BLM because black lives are in danger!”

FYN asked organizer Samantha Frost how the death of black Americans can end at the hands of law enforcement, she responded with retraining.

“I fully support our police here. During one of our meetings, we asked is a knee to the neck a normal thing. They said no that’s a red zone and that’s how they’re trained. So, I would just say retraining and maybe some mental health training also for their own benefit.” 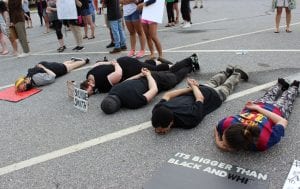 Some protesters took to lying down as if under arrest in front of the counter-protesters.

The organizers also set up a voter registration station for people who wanted to exercise their right to vote in the upcoming elections.

On the other side of the caution tape, people expressed their belief that “all lives matter,” not just black lives.

“I feel like everybody’s life matters, not just black, white, pink, purple, brown. Every single person here life matters,” added another counter-protester Linda Meade. “The closer and closer I [saw] that it was coming to our town. I felt like we needed to be out here to support the people in our town because up here in Blairsville, we’re peaceful, loving community. Everybody waves at each other. Everybody’s friendly. We help each other out. We don’t need all this chaos coming up here. People bringing all this hate to our county. People come up here to relax and get away from such a hard life down there. We don’t need all this in our county.” 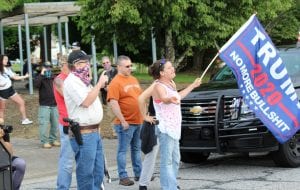 Counter-protesters gathered across the street from the courthouse.

BPD asked everyone to return to their cars by 7:45 p.m., so streets could be opened to through traffic. Everyone left without incident, marking another successful peaceful protest and counter-protest in North Georgia.

To view the entirety of the speeches, please view the video below.