BLAIRSVILLE, Ga – Almost 200 people demonstrated their support in All Lives Matter North Georgia and listened to several speakers, including former officers, talk about their experiences. 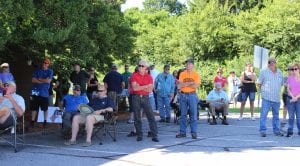 All Lives Matter North Georgia was the brainchild of Jamie Tiblis, 25, who wanted to demonstrate her appreciation of public servants. The event took her and others around two weeks to organize, and they hope to have more in the future.

Tiblis had a long-standing respect for law enforcement, but recently she went through a life experience, and the police were the ones who helped her through the situation. Now that she’s in a position to return the favor, she wanted them to know how much she and others in the community support them.

“It’s mainly about showing support for law enforcement, also first responders, and health care workers because right now all of them are risking their lives for the community. I think if anybody deserves a rally right now, it’s definitely them,” explained Tiblis.

She chose All Lives Matter because she wanted to include everyone, even Black Lives Matter supporters. The rally in her eyes wasn’t for just one group, but anyone who wanted to participate.

“The last thing that our group would intend if for [BLM members] to feel left out. A lot of people have said, why don’t you change the name to Blue Lives Matter or something else more specific,” clarified Tiblis. “The reason I don’t do that is I don’t want to leave out Black Lives Matter. It’s very important they are included in our group. I wanted this group to be as inclusive as possible.”

Law enforcement on the scene of the rally.

The former officers described their experiences with minorities and life as part of the force. One individual identified as Jim policed a violent area for 20+ years. He recounted a powerful story of a young black boy. The child lived in a house with seven people and his grandmother, who the child claimed sold drugs. One day, the little boy begged Jim to let him go home with him, and eventually, Jim relented. Jim asked the boy’s grandmother if he could take the child home, and she agreed as long as he was back by Sunday afternoon.

On Sunday afternoon, no one was at the boy’s home, but later Jim’s superior paged him as asked if he had a little black boy with him. He confirmed that he did, and they were both told to drive over to the station. Once there, he discovered the grandmother had accused him of kidnapping her grandson. 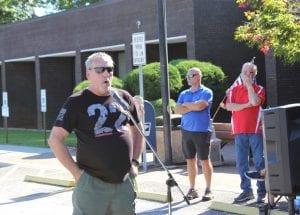 Jim received a verbal warning, and the child went home with his grandmother. Supervisors and an IA investigator asked him, “what were you thinking? You took a young black man into your house. You’re white. White people don’t take black people into their homes.”

Around 20 years later, the boy found Jim at his new first responders’ business and told Joe that he saved his life. The boy spent seven years looking for Jim to tell him that he loved him and would never forget him.

“We all had the opportunity to come together when Mr. Floyd lost his life…Every single police officer and I’ve talked to many. I’ve got a lot of good friends up and down the East Coast. [They] said it was an atrocity. It should have never happened, and we all hope to God that officer is persecuted to the fullest extent,” said Jim.

Many of the attendees avoided the heat in the shade, but others stood along courthouse road, waving flags and holding signs in support of public servants. Several passersby honked their horns to cheer on and champion the event’s purpose. 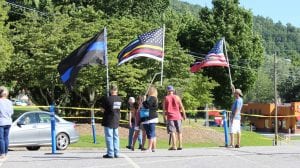 Rally-goers waved flags as cars drove past the event.

Other attendees expressed similar sentiments in asserting their right to peaceably assemble as well as support those who work to make everyone’s lives a little bit easier.

“I just wanted to support our first responders and our police because I appreciate that they put their lives on the line every day for us, and I know that it is a thankless job most of the time. I wanted to take time out of my day to show them that I appreciate that because when I’m in trouble, that’s who I am going to call. I appreciate them. I pray for them. I’m happy to be here.”