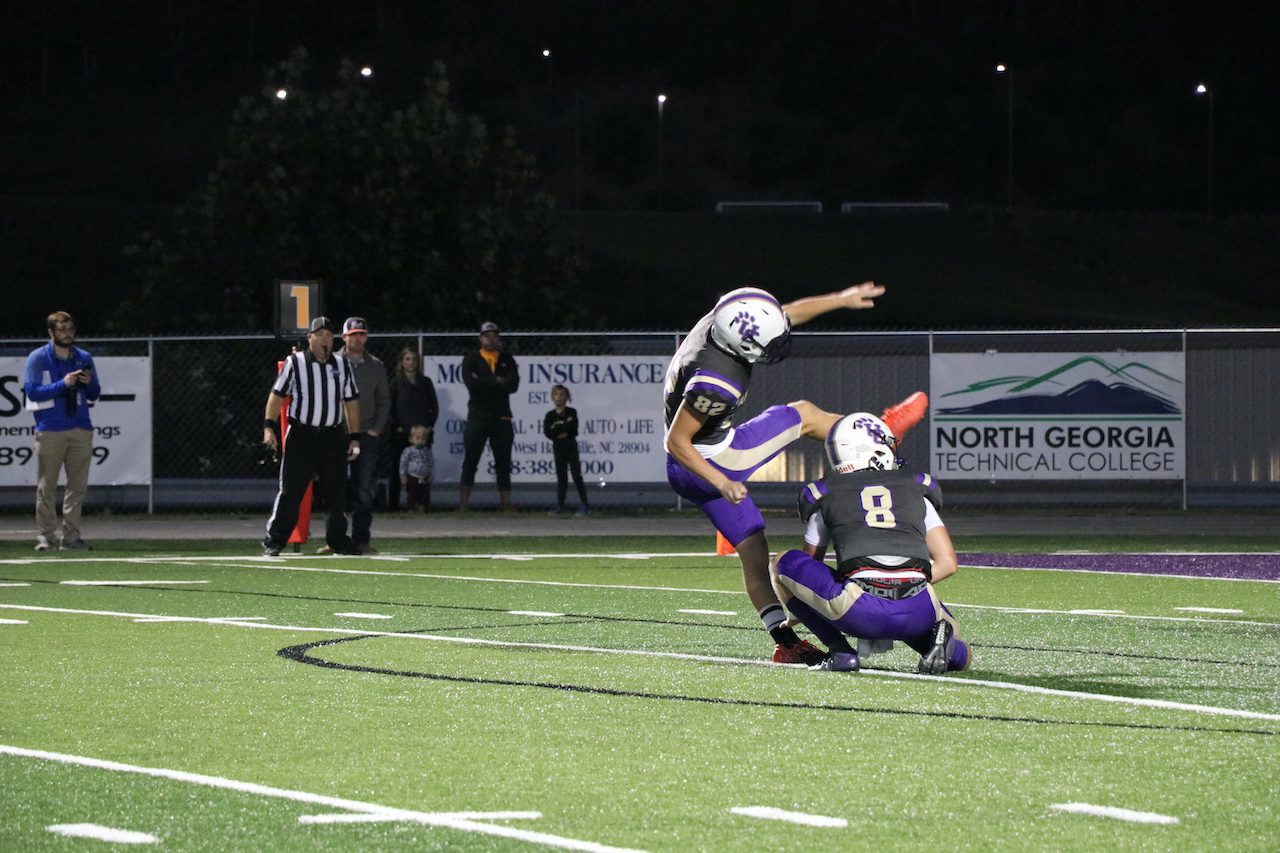 Blairsville, Georgia- The Union County Panthers hosted the Murphy Bulldogs in the first matchup between teams since 1989. The Panthers look to pick up their first win of the season and first win under Perry. 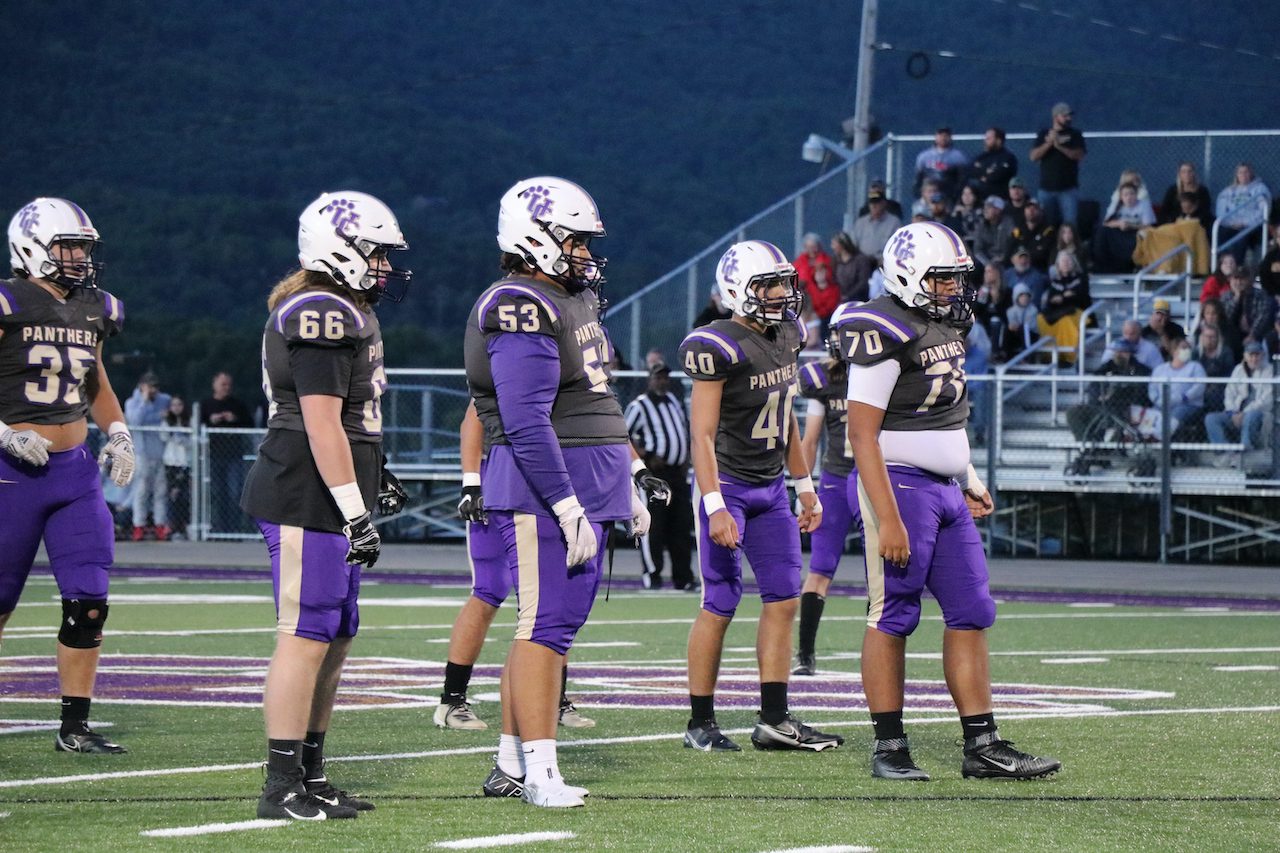 The Panthers started the game on offense and found some rhythm early but failed to pick up a 4th conversion. The Bulldogs took over in their own territory but the Panther defense held strong and forced a punt. After a pass interference call, the Panthers had a first down at midfield. 2 big catches by Senior Keyton Chitwood and Sophomore backup QB/RB Caiden Tanner picked up 2 quick first downs for the Panthers. On 3rd down, Senior quarterback Logan Helcher found Junior receiver Griffin Young on a crossing route and Young picked up the first down to move the ball down inside the Bulldogs 5 yard line. Helcher tossed it to Tanner on a speed option play and Tanner scored from 2 yards out to give the Panthers a 7-0 lead early in the first quarter. That score was the first points scored in the first quarter by the Panthers this season. The Panthers defense was having a tough time slowing down the Bulldog offense. Quarterback Kellen Rumfelt found Payton McCracken for a big gain to get the Bulldogs into Panther territory. Runningback Ty Laney picked up a huge gain after running through Panther tacklers all the way down to the 20 yard line.

Rumfelt found receiver Cole Laney for a big first down pickup. Safety Eli Peugh made a great play on the ball but just missed the ball by an inch. The Panthers defense held strong but the Bulldogs inched their way closer and closer to the goal line and eventually score. The Bulldogs would miss the extra point and trail 7-6.  After a great kickoff return by Peugh and a dropped pass by Chitwood on first down, Helcher picked up a huge gain on a designed QB draw to get inside the Bulldog 30 yard line. After a 8 yard gain by Sophomore receiver Jensen Goble, Freshman running back Connor Schuknecht picked up a first down. Helcher found Young over the middle for a big pickup down to the 2 yard line. After slipping on the previous play, Helcher found the end zone to put the Panthers back in front 14-6. The Panthers defense was doing a good job slowing down the Bulldog offense but just couldn’t get the big stop on 3rd down. The Bulldogs drove all the way down the field and Rumfelt scored on a 1 yard run to tie the game 14-14 late in the 2nd quarter. The Panthers had 48 seconds to make it into field goal range for Senior kicker Kyler Robbins. Helcher quickly found Goble for a quick pickup to get around midfield, then found Chitwood to get across midfield. After Helcher ran out of bounds after a nice pickup and short gain on another run, Helcher found Young across the middle with less than 5 seconds left and the Panthers called timeout. After the Bulldogs called timeout as they tried to ice Robbins. Robbins made the 39 yard field goal to give the Panthers a 17-14 lead at halftime.

The Bulldogs were again driving the ball downfield and the Panthers were missing easy tackles. Juan Allen got the end around handoff and took it 40 yards to give the Bulldogs their first lead of the game 21-17. The Panthers couldn’t get anything going early in the drive but penalties by the Bulldogs kept the drive alive. Helcher found Young over the middle again and Young picked up a huge first down. Tanner picked up another huge first down to put the Panthers inside the Bulldogs 10 yard line. After 2 short rushes and a pass interference call at the 1 yard line, Helcher found Tanner in the corner of the end zone for a 5 yard touchdown to put the Panthers back in front 24-21 with 4 minutes left in the 3rd quarter. The Bulldogs again drove the ball downfield easily and Allen scored on a 15 yard rush to put the Bulldogs up 28-24 just as the 3rd quarter ended.

Nothing went right for the Panthers in the fourth quarter. Helcher threw 2 interceptions and fumbled. One interception and the fumble by Helcher was returned for touchdowns. The Bulldogs would go on to win 54-24. the Panthers were outscored 26-0 in the fourth quarter. The Panthers played a great first half and had some confidence and rhythm on offense. The Panthers have a lot of positives that came from this game and hope to start off region play on the right foot next week @ Riverside.